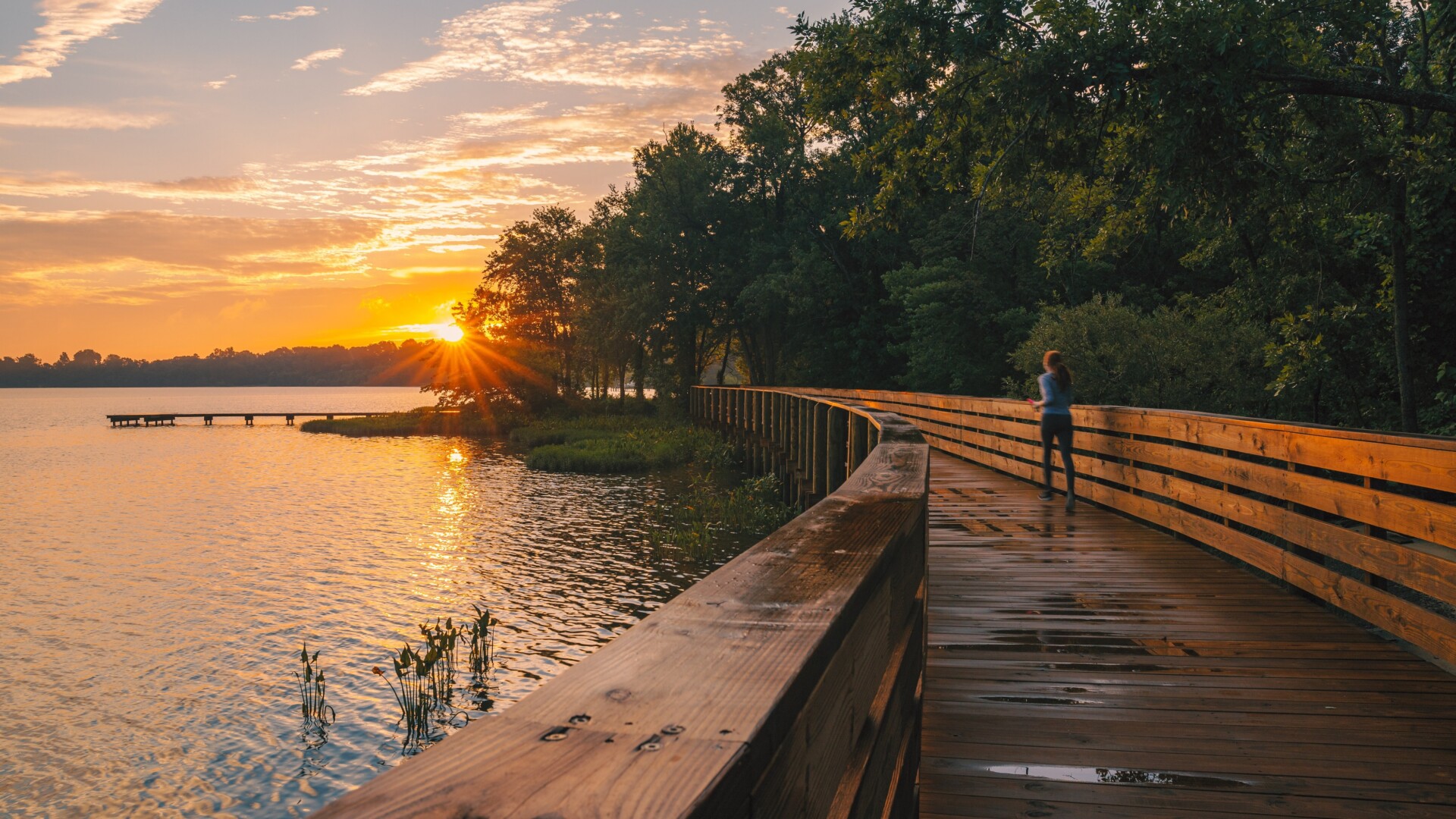 One of the next legs of another regional walking and biking trail is being further mapped out.

The planning process is underway for the western edge of the Appomattox River Trail, a partially completed 25-mile paved path that will run east-west from Hopewell to Lake Chesdin.

Friends of the Lower Appomattox, the nonprofit leading the creation of the trail, is in the home stretch of fundraising to cover the costs of the planning and engineering for this latest section.

It will include 2 miles of paved mixed-use trail, a bridge and renovations to Ferndale Appomattox Riverside Park between Lake Chesdin and the Petersburg-Dinwiddie line, which together will make up the western entrance of the Appomattox River Trail.

Executive Director Wendy Austin said the nonprofit expects to spend $1.8 million to conduct planning and engineering on that section. It’s currently about $100,000 short of that mark, but Austin said it intends to meet the goal before the end of the year.

The project got a boost last summer with a $1 million grant from the Cameron Foundation, a quarter of which has been set aside to help meet a match requirement for a $500,000 grant from Richmond-based Cabell Foundation that FOLAR is currently pursuing.

Its main feature is a 10-foot-wide paved mixed-use path that will upgrade existing dirt pathways along the river. Portions of the trail will run along both riverbanks and will connect existing parks like Hopewell Riverwalk.

“Much of that is (currently) passable as dirt trails and that kind of thing. Our goal is to create this bicycle-and-pedestrian trail,” Austin said. “I would say FOLAR really started with the vision of protecting the river and creating this greenway trail, so we did it as a dirt trail. Just volunteers making a path, and you could sort of wind your way if you were an intrepid traveler the whole way.”

Austin said that as of January about 5 miles have been paved, another 5-miles worth of funds are in hand and an additional 4.5 miles is partially funded. 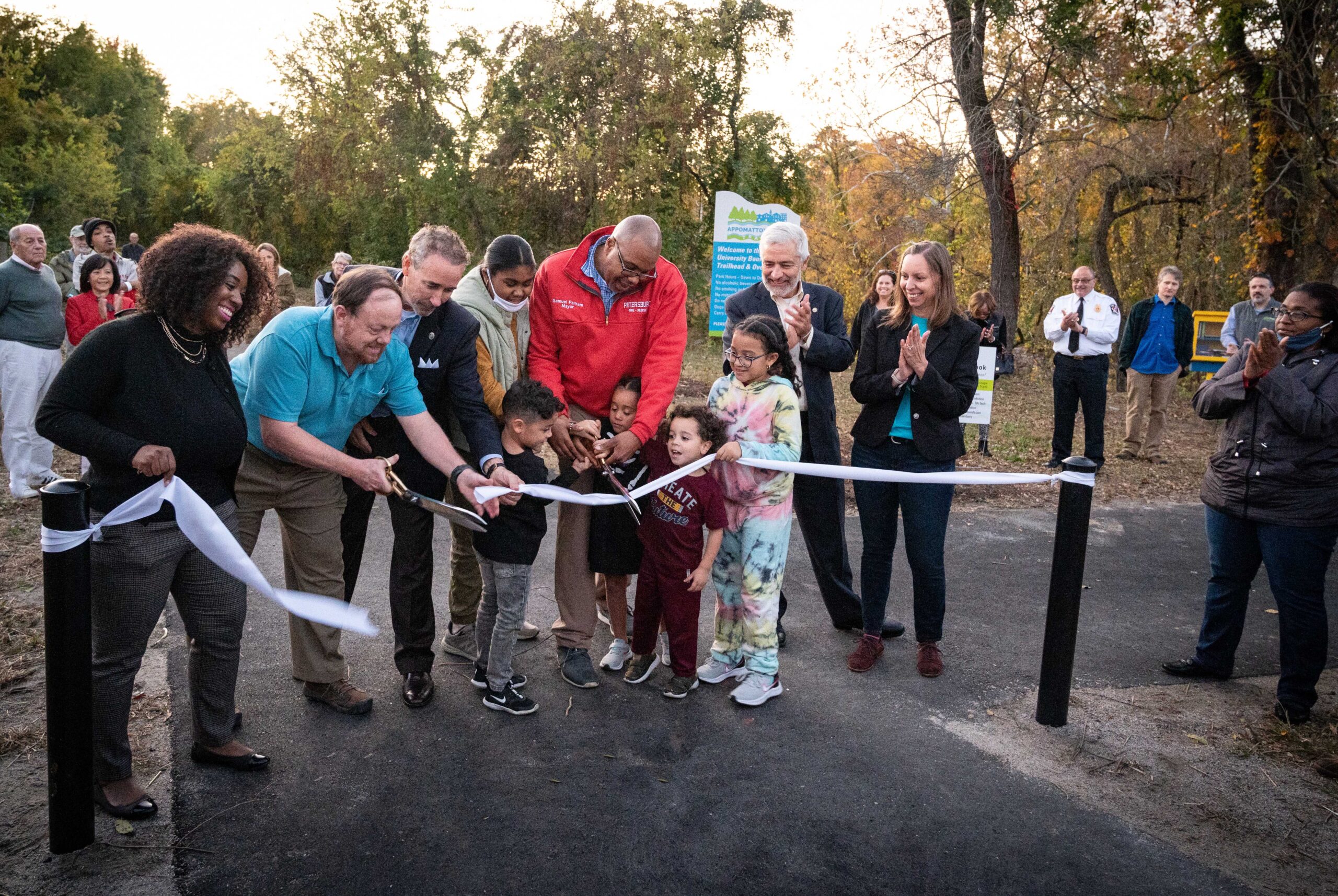 Local officials cut the ribbon in November on the Appomattox River Trail’s University Boulevard trailhead, which is just across the river from VSU. (Courtesy of Petersburg Area Regional Tourism)

FOLAR held a ribbon-cutting ceremony in November for the University Boulevard trailhead, which is just across the river from VSU and in the central part of the trail. The third-of-a-mile section was the first part of the trail to be fully completed in Petersburg.

The trail would also connect with the Fall Line, a proposed north-south trail that would run from Petersburg to Ashland.

Austin said the vision of the Appomattox trail is to be both a recreational amenity as well as a transportation route.

“We see the benefit of that connection, the huge benefit of trails, as opportunities for active transportation. Walking and biking rather than driving, which leads to a more active and healthy lifestyle for our community members,” she said.

The trail itself is currently expected to cost $35 million, funded through public and private money sources. That total doesn’t include some related expenses like signage and amenities.

The Virginia Capital Trail, a 52-mile trail from Richmond to the Williamsburg area completed in 2015, cost $75 million to build. The proposed Fall Line trail was most recently projected to cost about $300 million.

“These trails are about a million dollars a mile because there’s so much runoff culvert improvement to do, so much that we have to do with environmental work and engineering,” Austin said. “We have to be sure emergency vehicles can get through and all those sorts of things. It’s quite an extensive process to make these paved public trails.”

The nonprofit hopes the trail will be completed in 2030. The project’s master plan was created in 2017.

Thanks to Our Volunteers who Rocked the River Clean-up!
May 4, 2022