By Leslie Middleton, The Chesapeake Bay Journal — The Appomattox River in Virginia has long been a river I’ve wanted to explore. Its name conjured up associations with the Civil War, but otherwise I knew little about it. Lucky for me, a water trail helped me to tackle the adventure.

The Appomattox is the largest tributary on the tidal portion of the James River, originating near Appomattox Courthouse where Confederate Gen. Robert Lee surrendered to U.S. Gen. Ulysses S. Grant in 1865. It flows roughly east 146 miles to join the James at the city of Hopewell, 20 river miles downstream from Richmond. 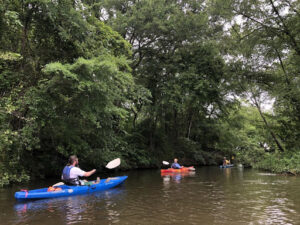 With close to a dozen possible small boat launch sites on the tidal section alone, I was grateful for some local knowledge. On a cloudy May morning, Brad Flynn and Aaron Reidmiller from Hopewell’s parks and recreation department introduced me and my husband to two sections of this river, starting in Petersburg.

We put in at Pocahontas Island — a slender peninsula adjacent to the cobbled streets of Old Town Petersburg — and paddled upstream past remnants of the river’s rich history. Signs of modern urban progress were visible through the dense green foliage of trees and shrubs anchoring the banks and muffling Route 301.

We paddled underneath the roadway on our half-mile trip up the river, with hopes of glimpsing one of the oldest known Native American fishing weirs, a stone structure built to catch Atlantic sturgeon and other species. Local lore says that

this is where the Appomattoc Indians shared knowledge about the river’s bounty with the English colonists.

fall line where the river turns tidal. Above us, an osprey reported a successful catch as it winged away, fish in talons. A long-nosed gar left a broad splash in the rapids. A fisherman on the bank pulled a striped bass to shore.

Flynn pointed to a pillow of swirling water that was likely marking the fish weir below the surface. “You can really see it well at lower water,” he said.