Volunteers at the Heart of Appomattox River Spring Clean-up Success

On Saturday, March 24th, 151+ volunteers from businesses, civic and youth organizations, Fort Lee, and local residents gathered with the Friends of the Lower Appomattox River (FOLAR) to take part in the Annual Spring River Clean-up. In a matter of hours, the group removed 500 bags of trash, 118 tires, and two couches from along the banks of the Appomattox River at sites in Colonial Heights, Dinwiddie, Hopewell, Petersburg, and Prince George. This event is the largest of several cleanup and restoration events that FOLAR and its partners plan and implement each year, illustrating that the dedication of its volunteers is key to the success of its community-based endeavors. 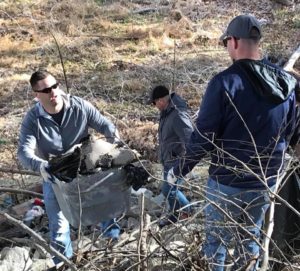 In addition to individual community members, Associates from Perdue Farms came out in force for a second year to the Hopewell Public Marina and combined with volunteers from Keep Hopewell Beautiful, American Water Company, and Rotaract collected the most trash of the day. At the Prince George Appomattox River Regional Park, the volunteers included youth and their families from Christ & Grace Episcopal Church. At Rosalyn Landing Park, C.H.A.R.T.S. (Colonial Heights Appomattox River Trail System) members were joined by volunteers from Essentra. Fort Lee soldiers were also out in force with more than 55 at several sites, including the Appomattox Regional Riverside Park in Prince George, Roslyn Park in Colonial Heights, Ferndale Park in Dinwiddie, and Patton Park in Petersburg. 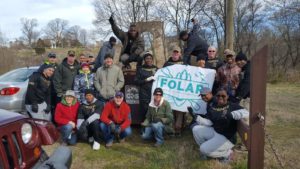 “We have amazing volunteers and partners,” said FOLAR Board Chair, Ken Newman. “It always inspires me to see all of the people who come out to our events in support of this community. We are also extremely grateful to our Parks & Rec partners in each community, especially Aaron Reidmiller, Craig Skalak, and Keith Rotzoll who were helping out this Saturday and to Container First Services for providing dumpsters and hauling the collected trash away.”

At the Prince George park there was additional excitement with the 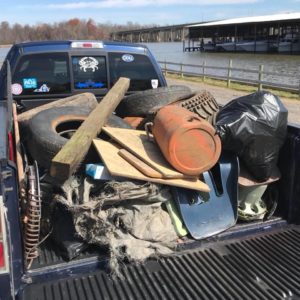 official opening ceremony of the improved canoe/kayak launch and preparations for the Annual 5K Trail Run which will be held there on April 7th.

“The good news is that many clean-up groups are reporting that their sites are staying cleaner,” said FOLAR Executive Director. “In addition to cleanup events, FOLAR focuses on advocacy, education and engagement of residents and local businesses on behalf of our river environment. We coordinate a number of programs – like this clean-up, the 5K Trail Run and the upcoming RiverFest – in which people with a spirit of community and a love of our most precious asset, the Appomattox River, can take part in our year-round efforts.”